A plaque acknowledging Mel's and the famous sign is located on the front of the building at 2580 El Camino Real.

In 1960, Mel's Bowl opened in Redwood City. However, it wasn't known by that name at the time. Nor was it officially called that when it ultimately closed for good.

The original name at the time it opened was "Redwood Lanes Bowling Center." When it closed in 2011 to make room for an apartment complex, it was officially known as "AMF Redwood Lanes." AMF refers to American Machine & Foundry Company, the country's largest operator of bowling centers.

A little about Mel 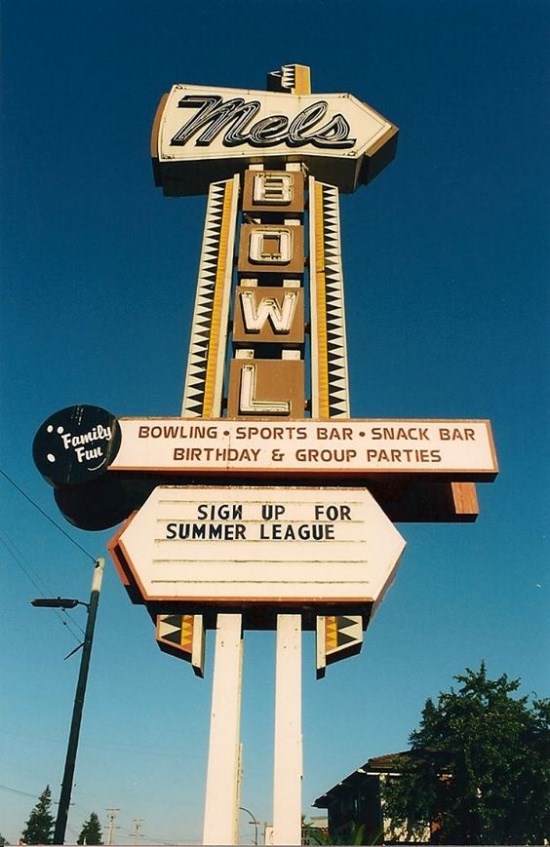 Mel Weiss made his reputation long before opening the Redwood City bowling alley. He had already made a name for himself with several drive-in restaurants known simply as Mel's Drive-in. His first location opened in 1947 in San Francisco. It was prominently featured in the 1973 coming-of-age film American Graffiti. Mel's was also where Spencer Tracy and Katherine Hepburn went for ice cream in the groundbreaking 1967 film Guess Who's Coming to Dinner.

Being a successful businessman with an entrepreneurial spirit, he realized bowling had become a favorite part of Americana back in the day. So in 1957, he opened Mel's Palm Bowl in San Jose. That was followed by Saratoga Lanes in 1959. Others followed.

In total, Mel owned at least four bowling centers, including the Redwood City center. For years the place was a hub of fun for individuals and groups of all ages.

As times and interests changed, each of the bowling centers gradually faded into the annals of a bygone era.

Mel's in Redwood City eventually sold in 1969, and at that point, the name changed to AMF Redwood Lanes. However, the sign was considered so special that it was left unchanged when it closed for good in 2011. Even though the official name changed in 1969, everyone always referred to it as Mel's Bowl.

Once it finally closed, the City wrestled with preserving the building or tearing it down. Eventually, they couldn't justify keeping the building, so it was demolished. Today an apartment complex occupies the former site of the bowling alley. However, the sign was considered a piece of valuable Americana; thus, it was preserved and relocated to the car wash on El Camino at the north end of town across from Stacks restaurant.

A plaque acknowledging Me'ls and the famous sign is located on the front of the building at 2580 El Camino Real.

Everything else is just history.