The city of Redwood City has been hit hard by the COVID-19 pandemic, as is evident by the nearly $83 million the city lost in the last two years and the millions the city projects in deficits over the next four.

That’s according to City Manager Melissa Stevenson Diaz who gave city officials and members of the public a grim outline of Redwood City’s FY 22-23 recommended budget during a more than two-hour study session on Monday.

In her presentation, Stevenson Diaz addressed the city’s current financial deficit as well as priorities for the coming year, including housing, transportation and child initiatives and a pandemic recovery plan.

While the city avoided layoffs and furloughs during the last few years, impacts of the dramatic loss of revenue have already been felt across city departments, which have suffered budget cuts, restructured benefits and hiring freezes, Stevenson Diaz told the council.

Compared to last year, the new budget for all salaries, wages and benefits, which comprise more than 66% of the general fund, has been reduced by 0.5%. Police and fire department salaries and benefits, which make up a significant portion of the budget, have also seen a reduction of 1.2% since last year. The police and fire departments make up 31.5% and 24.7% of the total budget, respectively.

While the recommended budget includes plans to unfreeze several positions this year, including five police officers, Stevenson Diaz said that’s only half the battle. She pointed to a shortage of qualified candidates and said that 9% of budgeted city positions are currently vacant.

Prior to the pandemic, Stevenson Diaz said that the city and its revenues were “healthy” and trending upward.

“Unfortunately with the recession, we have lost $82—almost $83—million dollars over two years,” she said. Though the city was able to supplement this year’s budget with $8 million from the designated reserves, Stevenson Diaz said that wasn’t nearly enough. “We are forecasting budget deficits over the next four years,” she warned.

Overall, the forthcoming year’s budget estimates a total of $339.4 million in revenues and $318.6 million in expenditures. However, looking only at the general fund, transfers and expenditures are expected to exceed revenues, resulting in a predicted $11.1 million deficit.

In addition to the operating deficits, Stevenson Diaz said that the city is short $360 million for the recently proposed Capital Improvement Program, which was reviewed in April and is expected to spend $524 million on basic infrastructure such as streets, parks and facilities over the next five years. 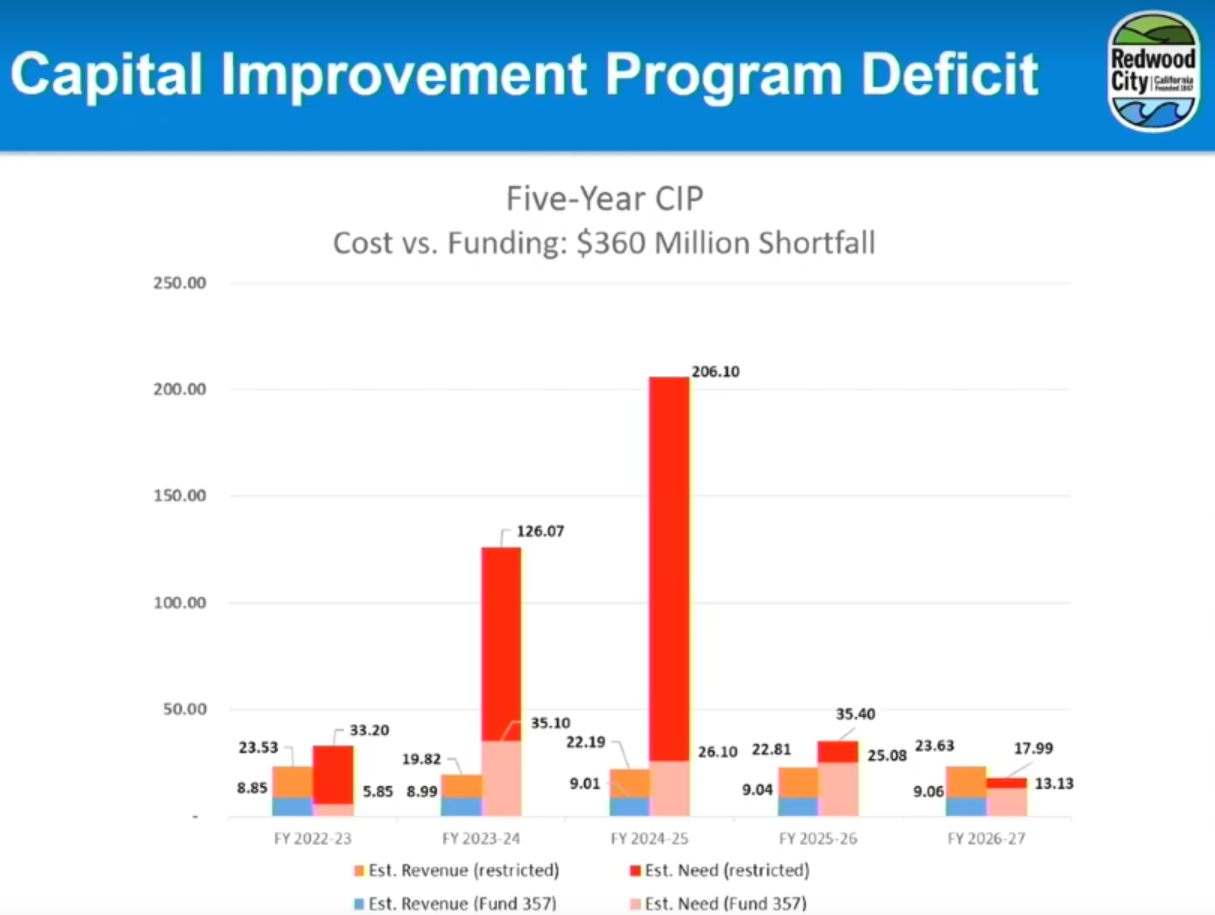 While general fund resources are expected to rebound slowly, she added “we don’t expect to reach levels of revenue that we had in 2020 until 2024-25.”

According to the proposed budget, general fund revenues are expected to increase by 6.7% from last year to roughly $171.3 million. Most of this will come from increases in property and sales tax, as well as recreation revenues. Property taxes make up 40% of the revenues.

However, recovering from the pandemic while continuing to provide for the community’s needs will require “thinking creatively,” according to Stevenson Diaz. She described efforts with the city’s finance and audit subcommittee to develop a “multi-year strategy” to explore new avenues of revenue, such as raising the transient occupancy tax on hotel guests and property transfer taxes.

Redwood City, too, was hit hard by what’s come to be known as the “Great Resignation,” during which a record number of Americans—over 47 million—quit their jobs in 2021.

In the meantime, the city is forging forward with ambitious goals, including advancing an Equity Plan, improving transportation infrastructure and safety, conducting a comprehensive study of emergency fire and policing needs and addressing climate change concerns such as sea level rise and unhealthy emissions.

Housing was the biggest winner among council priorities included in the proposed budget, with roughly $4.2 allocated towards rolling out several homelessness initiatives. These would include: finalizing the 2023-2031 Housing Element, implementing a new Anti-Displacement Strategy with four full-time Housing Division employees and working towards the goal of functional zero homelessness.

One of the more exciting items in the new budget was the People’s Budget, a pilot program that sets aside $1 million for a project of the community’s choosing. After vetting 483 ideas and counting nearly 1,800 votes, the city narrowed down the options to four finalists, which will each receive a portion of the allocated funds.

The People’s Budget received resounding support from the council. Calling it Redwood City’s “pièce de résistance,” Council member Michael Smith lauded the pilot for bringing the community into the governing process. Both he and Council member Alicia Aguirre expressed a strong interest in continuing the program in the coming years.

During the discussion, council members also expressed their gratitude to the city staff for their efforts in compiling and presenting the recommended budget. Mayor Giselle Hale agreed with Council member Jeff Gee, who described the proposal as a “pretty accurate reflection of what council said were priorities.”

Smith touted “several indications of the superlative excellent work that the city does around budgeting and finances” and said the city was “in excellent hands.” However, Smith and other members of council, including the mayor, emphasized a need for new and expanded streams of revenue that would bolster the city against further recession, without being regressive to local businesses.

The council voted unanimously (Council member Lissette Espinoza-Garnica absent) to advance the recommended budget on Monday. It will return to the city on June 27 for a public hearing and final adoption.

Leah is the lead reporter for the Redwood City Pulse. A Bay Area native, she has written about everything from biotechnology to true crime. When she's not writing, you can find her running or baking. Habla español!
Read more

Redwood City paves the way for permanent parklets in the downtown area
Jun 28, 2022 9:52 AM

From downtown to the Bay, a new urban park network will bring needed green space to Redwood City
Jun 28, 2022 8:05 AM