The updates include a two-part phasing plan, more on-site parking and detail on the architectural design

Leah Worthington
Oct 22, 2021 9:21 AM
Previous Next
1 / 1 A vital new outdoor plaza looking to downtown and the train stationSequoia Station design plans screenshot via Lowe
Expand
Previous Next
Listen to this article
00:06:12

Developers have resubmitted conceptual design plans for the Sequoia Station project, which includes six blocks of office, retail and residential spaces, as well as child facilities and public open space.

In their Oct.18 application to the city, developers described the projects as Redwood City’s “missing puzzle piece” and “a place for all.” The Sequoia Station update proposes completely overhauling the existing transit and shopping centers, addressing everything from transportation to housing, shopping and recreation needs.

The mixed-use development, which ranges from eight to 12 stories, contains 254 affordable housing units, 377 market-rate units, dedicated land for expanded Caltrain tracks, among other additions. A previously proposed 17-story tower has been removed. 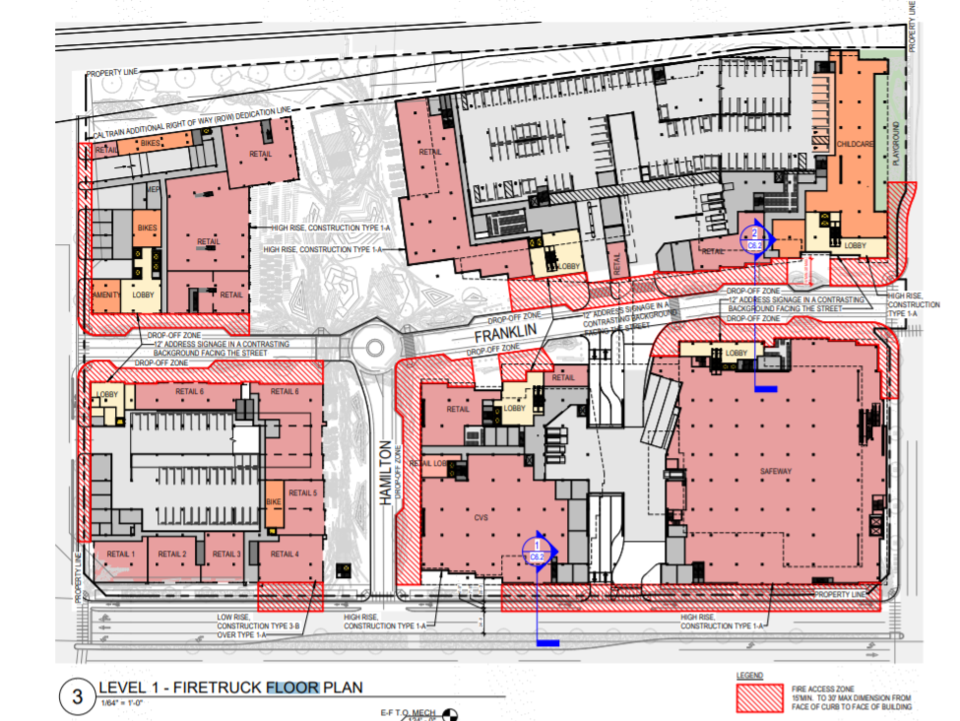 The planning application, made public Thursday, represents a joint effort between developers Lowe Enterprises and Eden Housing and is part of a larger project led by the city’s Community Development and Transportation Department to develop a 17-acre “Transit District” in Downtown Redwood City.

Included in this new plan are 53,000 square feet of new plazas and open space, pedestrian- and bike-friendly streets, 170,000 square feet of retail space including a new Safeway and CVS, and on-site childcare facilities. Additionally, two new housing developments will offer a total of 631 affordable and market rate homes, 50% of which will be 2-3 bedroom family units.

“We’re certainly excited to move the project along,” said Lowe’s Senior Vice President, Alan Chamorro. “Our goal is to support the Transit District process by developing a transformational project that will unlock local and regional transit opportunities and deliver extensive community benefits.”

To address transportation needs, the developers will be dedicating approximately 1 acre of land to an expanded Caltrain station with four tracks, more amenities like bike parking and convenient pick-up and drop-off zones, as well as safer connections between the bus depot, Caltrain platforms and the Downtown area.

According to Principal Planner Lindy Chan, the update isn’t significantly different but rather a refinement of the original plans submitted in May 2021. Amendments include a two-part phasing plan for construction to enable ongoing operation of the current shop, including Safeway and CVS, revised maps to maximize residential and retail parking, and refinements to the architectural design, colors and materials.

Beyond any minor amendments, Chan said that the city will not take action on the revised application until next fall. In the meantime, the city is working on necessary modifications, such as increasing development caps, to the Downtown Precise Plan (DTPP) and the Transit District plan to pave the way for the redevelopment of Sequoia Station. 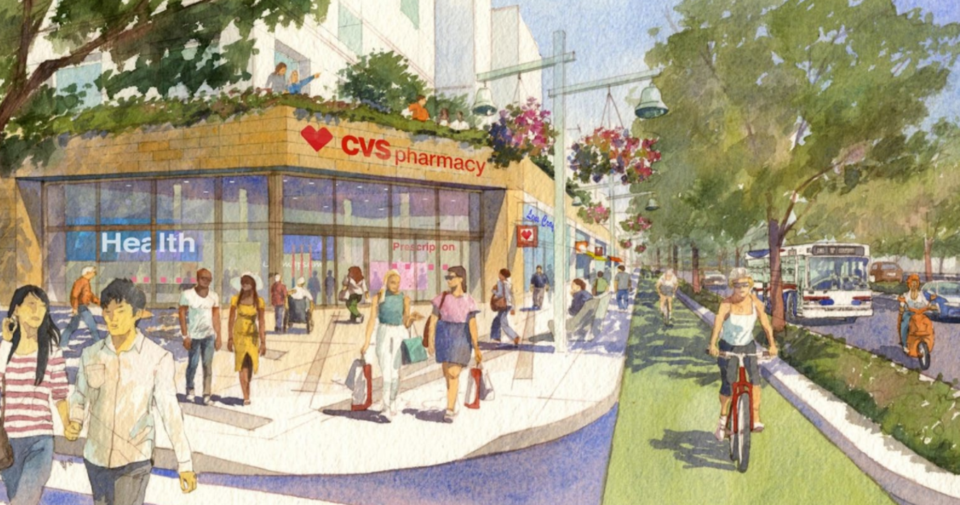 According to Chan, the city is also preparing a Subsequent Environmental Impact Report (SEIR), which includes public comments received before the end of September. In addition, the city “will be soliciting community input concurrently with the environmental review in November on such topics as placemaking, connectivity, and open space,” Chan wrote in an email.

“We plan to provide a survey, attend neighborhood meetings, host pop-ups at community events (such as at the Farmer’s Market) and send out informational updates,” Chan said. “This feedback will further direct the ultimate Transit District standards, grade separation design, and station concepts.”

Ultimately this project reflects a large-scale effort to modernize city and county-wide transportation.

City Transportation Manager Jessica Manzi said that “Caltrain’s long-term service vision is to have Redwood City’s station be a hub station for their service, where you have local and express trains coming in, and people can transfer between the locals and expresses.”

To make room for this expansion from two to four tracks, Sequoia Station will have to shift to the north, Manzi said.

“What I'm working a lot on is, where's this new station going to be located? How is it going to work? What does that mean for the grade separations?”

Though Manzi acknowledged that the pandemic has had a significant impact on Caltrain ridership over the last year, she expects that the “overall mobility needs of the regions will continue to be there” years down the line.

“This new hub station is easily in the 10 to 15 year timeframe,” she said. “And there will be a need for high-quality transit service in the long term.”

She added that, while pre-pandemic “the service had been focused more on the standard office commuter … the people who are still riding are frontline workers,” including hospital, restaurant, and other essential workers whose jobs continued despite COVID restrictions.

For her part, planning commissioner Isabella Chu hopes that ongoing developments will continue to prioritize the needs of the community.

“Look at people’s choices,” she said. “When you build a tower of housing and it fills up, that shows you people want to live here. Even if people protest, 600 people still chose to live there.”

Though she declined to comment on the Sequoia Station project specifically, Chu said that she believes decisions around things like building height limits and pedestrian accessibility shouldn’t be limited to “what was popular in 1980 or what’s familiar.

“Redwood City is the capital city of one of the most prosperous counties in the United States,” she said. “When we think about how we should build, we should look to the future, and we should think about the next generation and what our city will need in 50 or 100 years.”

Leah Worthington is the lead reporter at the Redwood City Pulse, a local news site dedicated to providing accurate and timely news to the Redwood City community. Leah can be reached at lworthington@rwcpulse.com, on Twitter, and by phone at 650-888-3794. To read more stories about Redwood City, subscribe to our daily Express newsletter on rwcpulse.com.