You may be surprised to know Redwood City is not its original name.

California was part of Mexico, and the land where Redwood City is located was originally part of the vast Rancho de las Pulgas, (Ranch of the Fleas) which was granted to the Arguello family in 1835 by the Mexican government. After the Mexican-American War (1846-1848) California became part of the United States. Ownership of the land was expected to remain with the Arguello family. However, due to a legal ruling which effectively cancelled the grant from the Mexican Government, the burden of proving ownership became the responsibility of the Arguello’s. The issue was made more challenging because numerous squatters had encamped themselves on the land.

In 1851 a three-man commission was formed to hear the disputes and settle the matter.

The family matriarch Maria Soledad Arguello retained a sharp attorney Simon Mezes, to represent the interests of the Arguellos. Mezes, who was well connected, also happened to know one of the three members of the commission.

It took several years of diligent work on his part to resolve the various claims. Finally, in 1854 he was able to secure the clear title of the 35,000 acre Rancho in favor of the Arguello family. For his services, Mezes was awarded 5,250 acres (roughly 15%) of the Rancho along Redwood Creek.

His first order of business was to divide the land given to him into parcels and sell them. He established $75 ($2,600 today) as the price per parcel, which each squatter would be required to pay. Since they felt the land they had been living on belonged to them, having to purchase it didn’t go over very well.

An 1854 map of Mezesville shows It centered around California Square, which is where today’s San Mateo County Hall of Justice is located. The square was officially dedicated in 1905. The layout of the city and the square was designed to replicate a central square in Mexico City. Today all that remains of California Square is a plaque on the outside wall of the Hall of Justice.

The other parcel became known as Mezes Park, which was developed in the 1930s, and remains today at the corner of Warren & Standish Streets. In 1947 at a tank was placed in the park honoring veterans, which led to the park being nicknamed “Tank” Park. The tank remains to this day. 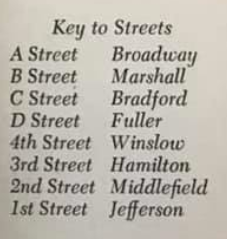 Some of the present streets don’t reflect their original names. (see photo of changed street names)

As for the city’s name, Mezes was so disliked, in 1867 when the city became the first in the county to officially incorporate, the name “Mezesville” was done away with in favor of “Redwood City,” reflecting the vibrant local lumber industry.

Alas, Mr. Mezes still has a park named after him, that is unless you call it “Tank Park.”