Although numbers are declining at local high schools, elementary school districts actually saw an increase in cases during the second week back at school.
Angela Swartz / Almanac Jan 21, 2022 12:42 PM
Listen to this article
00:09:21

Menlo Park middle schooler Isaac Chen woke up to a sore throat on Jan. 7. The 12-year-old took a rapid COVID-19 test and to his surprise, after a year and half of negative results, he received his first positive.

Isaac, a seventh grader at Hillview Middle School, is one of the 128 students and staff members in the Menlo Park City School District who caught the virus during the first two weeks back from winter break.

Local school districts began to see an influx of cases as students returned to campuses the first week of January, as the highly contagious omicron variant surges.

Isaac returned to school on Tuesday. He's not sure how he contracted the virus, but he credits his vaccination for his mild symptoms a cough mostly, which only lasted about three or four days. He filled his time isolated in his bedroom playing video games and doing homework. He wore a mask around the house aside from when he ate meals (separately from the rest of his family).

Isaac's mom, Francesca Segr, who is a Menlo Park district board member, said quarantining as a family was inconvenient and a little lonely, but it wasn't traumatic.

"It was not frightening on any level; he always had energy and was always in good spirits," she said "I hope that anyone who gets omicron gets mild symptoms. I thought this might happen and it happened. It wasn't as bad as I thought it would be."

The Sequoia Union High School District, which has about 11,000 students and staff, saw a decline in COVID-19 cases its second week back at school. There were 409 the week of Jan. 10, compared to 710 cases during the week of Jan. 3. Some 1,119 of the 1,352 cases during this school year have happened since the winter semester began.

Superintendent Darnise Williams asked parents and community members to step up to fill in for absent staff members. "Never have educators been faced with a crisis of this magnitude during our lifetime," Williams said in a statement to The Almanac last week. "As our district continues being stretched, we are now at a point where we truly need all hands on deck, and are asking parents, where they can, to volunteer and partner with us through this crisis."

Last week, Gov. Gavin Newsom signed an executive order loosening state regulations around the hiring of substitute teachers as districts grapple with staffing shortages, with teachers isolating at home with the virus.

The district has about 100 substitute teachers, down from 110 at the start of the school year, according to Todd Beal, who recently became assistant superintendent of human resources. He noted teachers who retired from the district don't want to sub as much right now to protect themselves from the coronavirus. The district has posted job openings on EdJoin and is considering posting openings on Facebook or Twitter.

The Ravenswood City School District saw a jump in cases its second week back. The week of Jan. 3, there were 87 cases. The district reported attendance was down to 58% at the end of last week, compared to its typical daily attendance of 92-93%. That same week, there were 120 infections reported to the district. The majority of the cases (41) were at Ravenswood Middle School.

In the Menlo Park district, there were 40 cases the first week back to school and 88 the following week.

In the past month or two, the district has received inquiries for substituting from 36 parents and community members, said Parke Treadway, the district's public information officer in an email. Those interested in subbing or filling in other roles can contact hr@mpcsd.org. 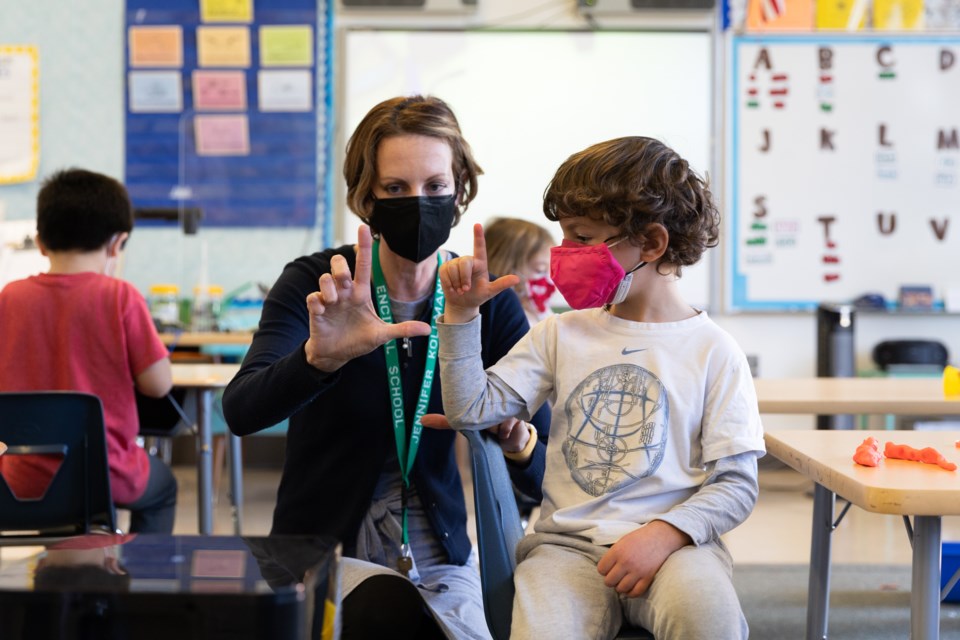 There have been 93 cases in the Las Lomitas Elementary School District since students returned from winter break.

There were 26 cases the first week back in the Portola Valley School District. Its second week after winter break, it saw just 12 cases. So far this week, there have been 12 cases reported to the district.

The Woodside Elementary School District saw six cases its first week back and 17 the week of Jan. 10. The district is in "dire need of a teacher substitute," according to a Jan. 17 district newsletter. Parents interested in being a part-time substitute teacher can sign up at woodsideschool.us.

Teachers and parents appear to be adapting to the surge.

Jacqui Cebrian, a Menlo-Atherton High School parent and co-president of the school's PTA, said so far school has felt safe for her daughter, a senior. Cebrian, who teaches reading at Oak Knoll School in Menlo Park, canceled plans for a picnic at Mt. Diablo to celebrate her mother's birthday last weekend because she and her daughter are "swimming in a sea of COVID everyday" at school and don't want to potentially expose her mother.

Cebrian's daughter has felt safe at school ("she's not nervous, so I'm not nervous," Cebrian said) and doesn't see distance learning as a good option.

"Other than not having absences, it hasn't really felt any different (since the omicron surge began) except for we're all talking about it a lot," she said.

Cebrian noted that it feels a little bit like it did in March of 2020, but she feels safer because people are vaccinated against the virus and wearing masks and not hanging out with people who are unvaccinated. She's adjusted her families' activities to limit her COVID-19 exposure to help keep schools open.

"The idea that we just have this last giant hurdle, and maybe this will be smoother soon, this helps," she said. "Sometimes you have to give people hope."


An M-A teacher, who asked not to be named for fear of retribution, said that the first week back to school was "really startling," but the school has been supportive of teachers, handing out masks and making sure airflow is good in classrooms.

"We're just frustrated more than anything," the teacher said. "We're in year two of this pandemic, why are we reacting? Why aren't we being more proactive?"

Their first day back at school, almost a third of their students were absent from their first period class (testing positive, having sick family members and delayed flights were some of the reasons for absences). The teacher said their classes have started to fill up again.

The Menlo Park district's governing board voted last week to require students to wear a medical masks, such as three-ply surgical, KN95 or KF94 or N95 in light of research suggesting that one of the best protections against the current surge is masks that provide proper fit and filtration.

Cloth masks may be used but only in addition to the higher quality masks; cloth masks worn on their own are prohibited. The board will reevaluate this guidance at a Feb. 10 meeting. Schools have medical masks in children's sizes for students who forget them, damage them or don't have access to their own.

Prior to break, Superintendent Erik Burmeister was prepared to recommend the removal of the district's outdoor mask mandate, but then the omicron surge hit.

The Ravenswood district administered nearly 2,000 tests last week, according to a staff report prepared for a Jan. 20 governing board meeting. Schools are also arranging for students to eat lunch outdoors as much as possible. The county is providing adult size KN95 masks for all staff, and the district has ordered child-sized KN95 masks, which should be delivered by early to mid February.

A district must plan to offer independent study options and demonstrate that they have exhausted all staffing options by consulting their county office of education and the state, said the California Department of Education website.

Private schools have more flexibility. Menlo School in Atherton, for example, went remote its first week back to reduce transmission of the virus on campus.