Can art enhance your eats?

Well, we’d point to the fact that most restaurant critics include ambiance in their assessment of any eatery, so there must be something to that idea. And here on the Peninsula, we have a special place in our hearts (and stomachs) for restaurants that go big on art-oriented interiors. From original floor-to-ceiling work by San Francisco’s favorite doodle master to a vast cartoon recreation of Japanese food hub Osaka, Silicon Valley delivers for those eager to eat with their eyes. And no, we can’t tell if it’s the creative stimulation, the Insta-friendly backgrounds…or the fact that we just like to eat tacos beneath a mural of a kid holding a fish (well, fishes…fish plural).

So as we slowly make our way back into restaurants, here are a few of our favorite restaurant murals from around the zip code. Take a look….(and snap a pic when you’re there…) 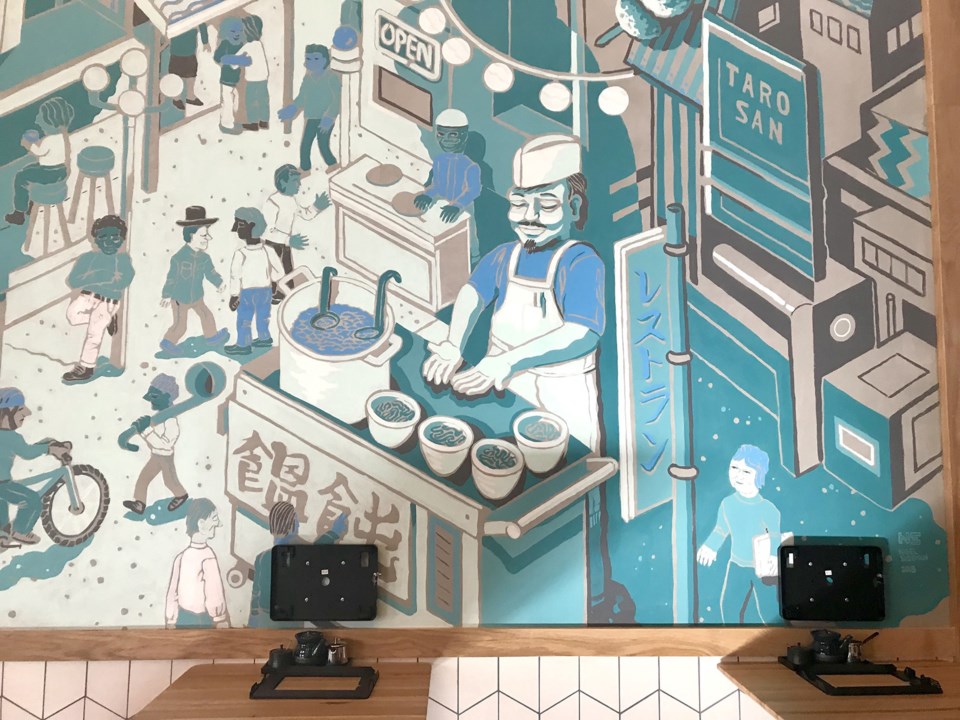 The idea came about in 2018 as Taro San’s owners Lihn and Jerome Ito were building out the restaurant. Sussman was asked to “create a mural that represented the streets of Osaka, the foodie hub of Japan; filled with all the food stalls, busy streets and people enjoying good food.”

The Itos say the mural is the restaurant’s focal point as it’s the first thing viewable upon entry and “adds an energy and vibe to the restaurant, allowing the viewer to enter the world of the painting.” 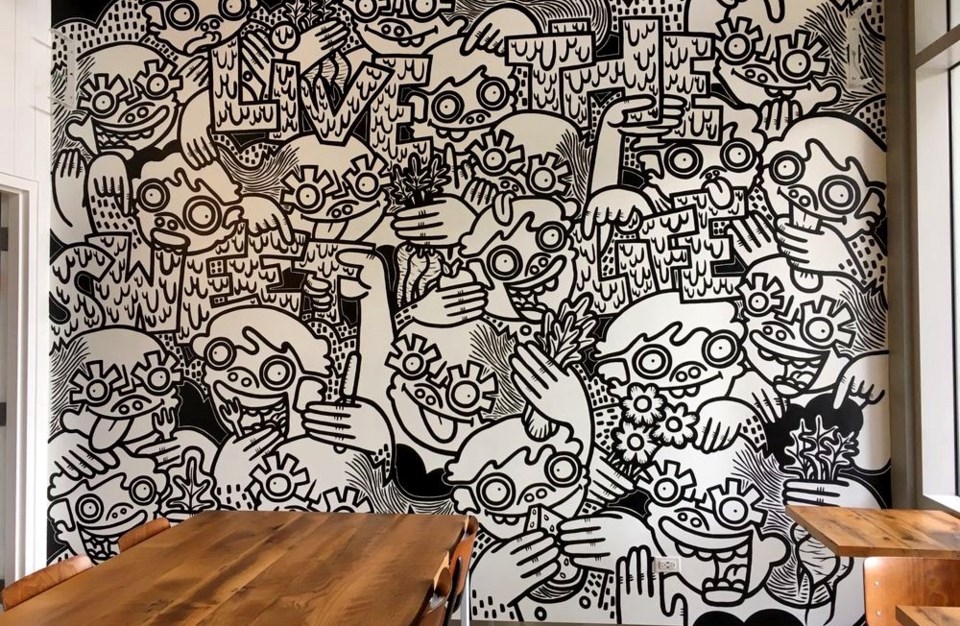 Twenty spectacle-sporting cartoon images surrounding the words “Live the Sweet Life” are plastered onto a wall at the Mountain View Sweetgreen location. The black and white mural was created by artist Lauren Asta who set out to design a “fun doodle world of healthy food and good times.”

Asta says she hopes restaurant visitors will “take a pause on life and enjoy the doodle life,” which she said is her own motto. Each doodle wears a goofy expression and overlooks the restaurant’s dining quarters. Asta, who says she spent three days creating the mural in 2017, wants viewers to know “good food and being healthy can be fun.” 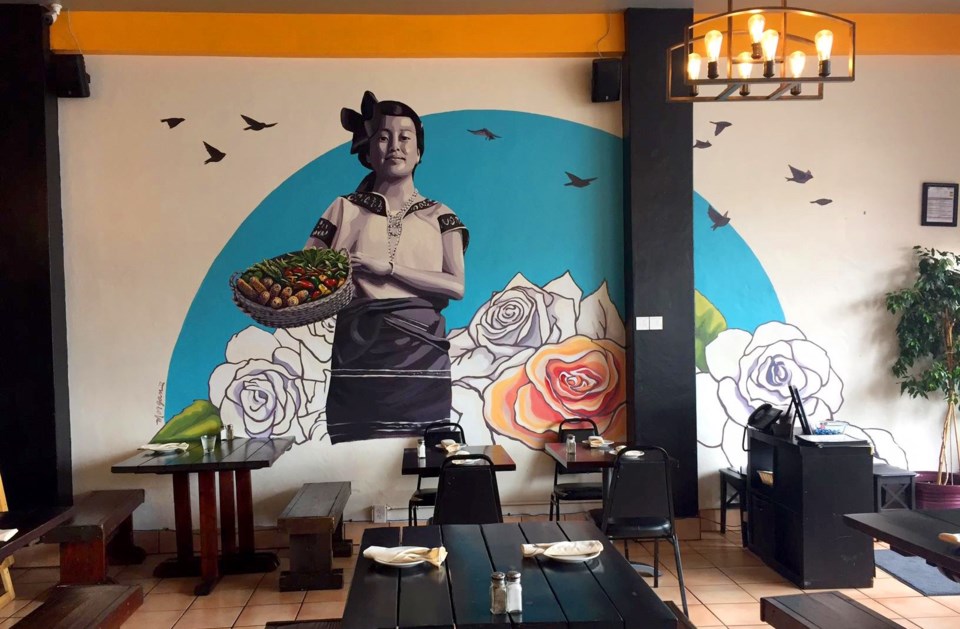 According to the artist, the pieces — one depicting a woman holding a basket of produce standing amid flowers mostly void of color, and the second, a young boy standing alongside colorless flowers and displaying a large fish dangling from each of his fists — were designed to be hip, casual and celebrate the La Viga market in Mexico City. Each of the murals contains a handful of black birds and a simple semi-circle color splash with the woman in front of turquoise and the boy’s image before a bright red backing.

At the time the mural was painted in 2017, Martinez told Bricca that adorning his walls with images was “like getting a tattoo on my business,” and has since said the murals have “made a huge difference” in his restaurant with customers enjoying the dining experience the images create. 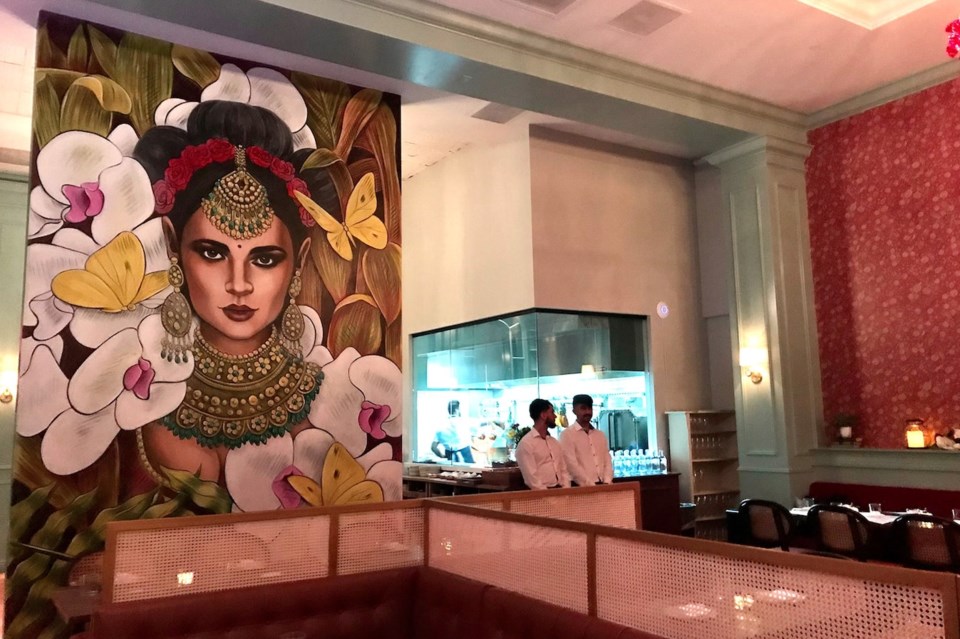 Designed and painted in January 2020 by artist Amanda Lynn, Rooh restaurant’s mural of an Indian woman peeking out from green foliage, butterflies and white flowers is worth a deeper look. Wearing a headband of red roses, bindi and green and gold oversized jewelry, the subject in the image is meant to make patrons pause.

“All of our restaurant locations have a mural of the woman,” says Rooh Co-owner Anu Bhambri. “They are an ode to strong and powerful women. Murals align with our concept, representing the new modern world while preserving the traditions.

“The mural is a focal point of the restaurant,” she continues. “It ties different elements of the space together. Space represents an old Indian haveli, a historical Indian building with enormous courtyards and ornate archways.” According to Bhambri, Lynn took inspiration from different elements already in place within the space, including the two plants meant to mimic mango trees at Rooh’s entrance and the restaurant’s floral wallpaper by Sabyasachi. 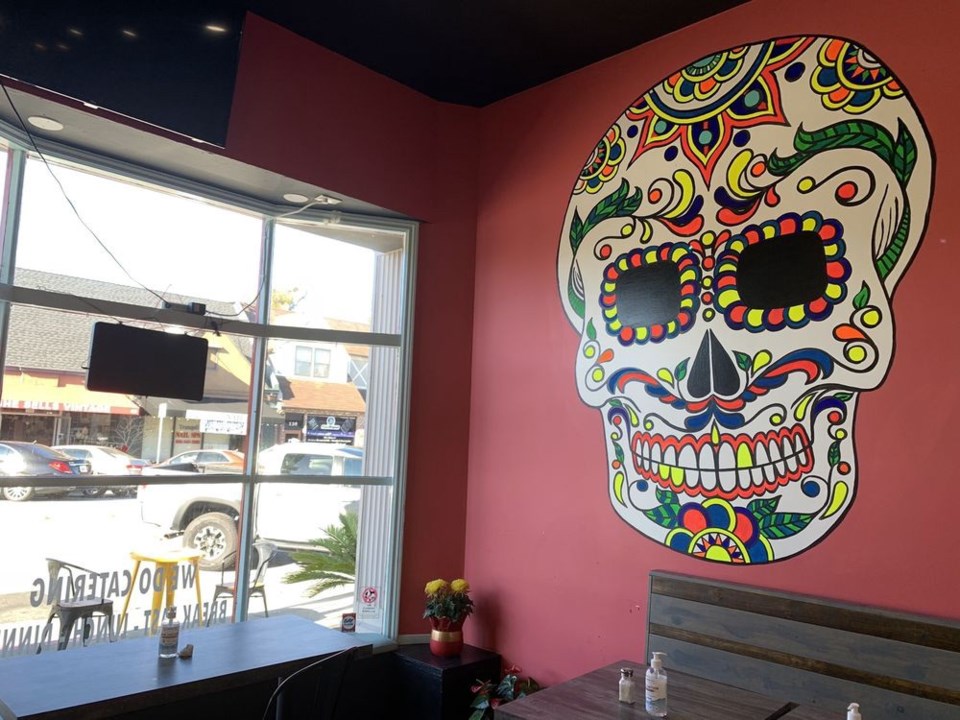 Two black and white sombrero-wearing men, one with a cigarette hanging out of his mouth, stare down diners. The smoker points a handgun directly into the dining room while his companion extends a bouquet of red roses — the painting’s only splash of color — toward patrons as they order. On a rosy wall, a brightly colored sugar skull looms. Painted in bright blue, hot pink, vibrant yellow, turquoise and green shades, the image serves as both a contrast and complement to the yellow wall across the aisle. 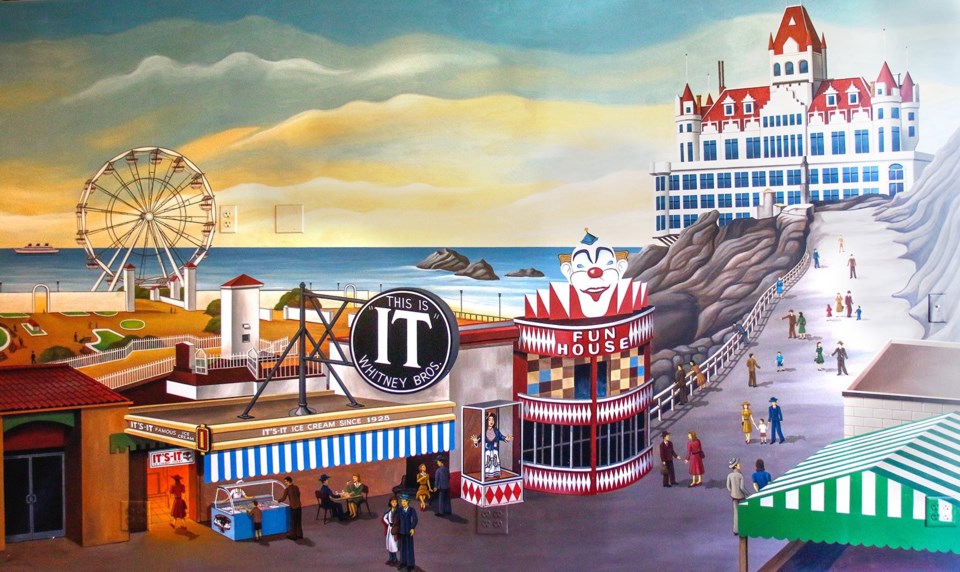 It’s not exactly at a restaurant, but everyone loves an It’s-It, and the Factory Shop has a mural worth visiting. Yes, it’s partially an image of the It’s-It Factory, but the mural has so much more and serves as an homage to the Bay. The image of San Francisco’s Playland-at-the-Beach, the original location of the It’s-It Factory, contains a Ferris wheel, fun house, cruise ship and a white, multi-story building built into the headlands above Ocean Beach, creating a carnival atmosphere viewers will want to dive into and visit.

Stay up to date with other coverage from The Six Fifty. Subscribe to our weekly newsletter, featuring event listings, reviews and articles showcasing the best that the Peninsula has to offer.