We enjoy a good sandwich as a perfectly self-contained, hand-held meal or a decadent indulgence accompanied by a stack of napkins. These Peninsula sandwiches satisfy from bread to filling, layer by layer. Have others you love? Email us at peninsulafoodist@embarcaderopublishing.com — we’d love to try!

The brekky sandwiches come with your choice of bread (sourdough, egg, brioche, gluten-free, wheat, rye, or English muffin). But if your choice of bread happens to be a glazed donut, get a donut burger. Yup, there’s a special section on the menu dedicated to donut burgers! Try the Donut Luther with a beef patty, bacon, American cheese and a fried egg. 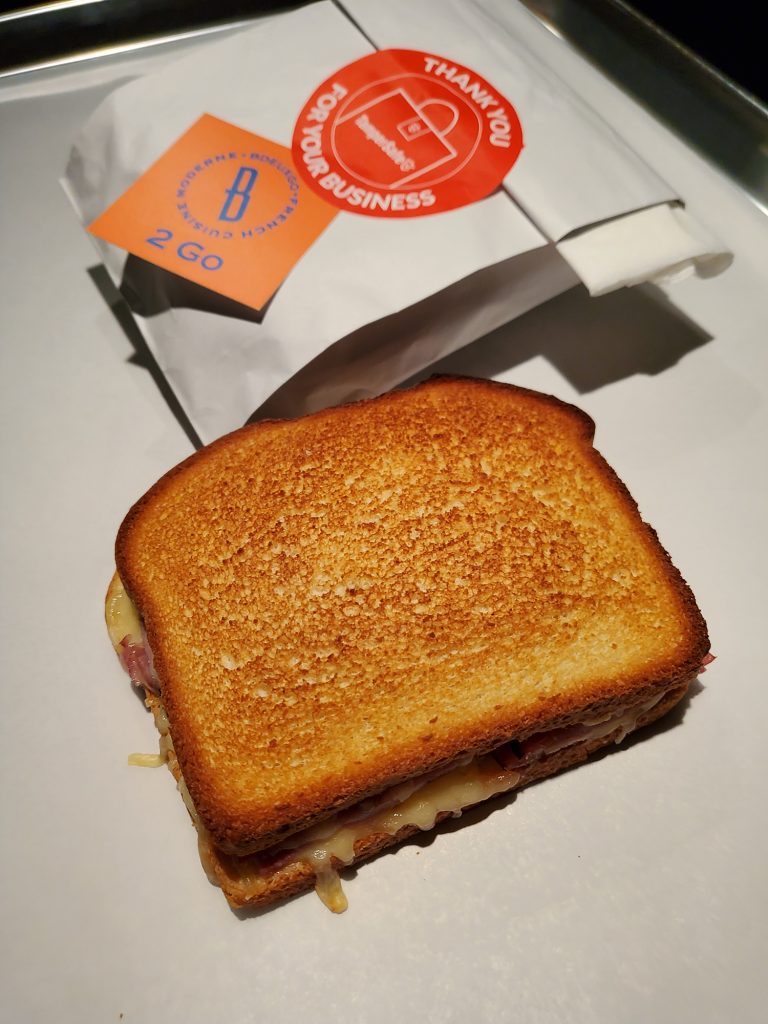 and bechamel sauce are perfectly packaged to eat on the run.

To make it easier to eat while out and about, the sandwiches’ buttermilk bread is baked with no oil on the outside, and served in a paper envelope with a napkin neatly tucked within.

Pick up your sandwich to go in Palo Alto from the restaurateurs behind the fine-dining restaurant Baumé — in fact, the team serves orders from Baumé’s kitchen door. The Chemel family launched their to-go sandwich concept in the fall of 2021.

This Belmont eatery has a tightly curated sandwich selection with a focus on fresh ingredients.

Each sandwich comes with your choice of side. Choose between marinated chickpeas in dill or pickled beets.

La Casita Chilanga has been in the community for more than 20 years. At an eye-catching location painted half green and half white on Middlefield Road in Redwood City, you’ll find tortas with fresh-baked talera, housemade aioli, xipoctli salsa, avocado, cheese and caramelized onion along with your choice of other toppings.

Circumstances were difficult when Juan Zamora and his partner first decided to open their own restaurant. They set out to achieve their goal shortly after 9/11.

“In that time, it was a hard time — like right now (during the pandemic),” Zamora says.

But they weren’t deterred. “We say, ‘You know what? We should put tortas here, like Mexico City-style.'”

He and his partner found a small place that could fit three tables, developed their own recipes and set up shop with tortas to go. The menu was inspired by their Mexico City hometown, different from the menus at the Asian and Italian restaurants that Zamora had previously worked at.

The team is a mainstay in the Peninsula sandwich scene. In addition to Middlefield Road, La Casita Chilanga has locations on El Camino Real as well as in San Mateo and San Jose (watch for different items on these menus).

The Harbali family has a decadeslong history of building food businesses with prized beef, sheep, poultry, and lamb. Their most recent addition to their restaurant repertoire is Jood in San Carlos, showcasing barbecue.

Try a sandwich made with slaw and pickles on lavash, with fries on the side. The Minced and Kneaded Sandweesh is made with meat or vegan kafta, hummus and tahini, and the bestselling Taook Sandweesh is made with marinated grilled chicken breast, creamy garlic sauce and ketchup. Heaven’s Sandweesh offers a vegan option with eggplant, cauliflower, pesto and tangy housemade sun sauce.

The online menu has a handy chart with allergen information.

Served out of a bright red caboose off Highway 1 in Half Moon Bay, the hamburger sandwich previously made the Peninsula Foodist’s chef’s bucket list. Served on grilled bread from Rosalind Bakery, the sandwich is made with beef, soft egg, cheese, red onion pickles, “Dad’s Sauce” and red oak lettuce.

Also not to be missed is the mushroom sandwich, made with the same ingredients as the burger except for the beef. In place of the patty are maitake mushrooms.

The eatery was opened by co-owners Alexis Liu and Scott Clarke in 2017. After the birth of their daughter, Clarke left his role as a chef de cuisine at the three Michelin-starred Saison as the family sought balance.

Little Lucca: Egg salad on Dutch crunch, with everything

Little Lucca has been on the Peninsula since 1980, expanding from South San Francisco to Burlingame. Choose between a roll (sour, sweet, wheat, Dutch crunch or ciabatta) or sliced bread (rye or white).

If you get a roll, the Little Lucca team scrapes out the middle, creating a pocket of crust for maximum filling.

Order your sandwich with “everything” (mayonnaise, mustard, pickles, red onion, lettuce, tomato), and especially one (or both!) of the housemade hot pepper and original garlic sauces for extra spice and savoriness.

Order ahead so your favorite doesn’t sell out, then pick up street toast at this newly opened eatery in San Bruno.

For those who crave a meaty sandwich without the actual meat, try a Reuben on rye made with plant-based corn beef, apple and celery root slaw, bread and butter pickles and Thousand Island dressing. Get it with havarti cheese for a vegetarian option, or plant-based smoked provolone cheese for a vegan option.

The menu also has options for gluten-free sandwiches, including chimichurri steak and bacon or chicken pesto caprese (these both have meat), a plant-based burger and more.

Head to Burlingame for a luscious lobster roll with a side of crunchy chips and coleslaw. If you want pure meat, order the Naked option, served with a side of butter, or get mayo, salt and pepper with the Dressed option. The menu also offers a seasonal choice.

The company started out as a wholesale distributor in Maine in 1987 before opening up a market for the public in South San Francisco in 2002. Its brick and mortar eatery has been in Burlingame for about a decade.

Each is served on a Martin’s potato roll. Also used by Shake Shack, the bread holds up to a hefty half-pound of thigh meat, as well as sauce and juicy pickles.

If you’re feeling especially bold when it comes to spice, try a level 4 hot chicken sandwich from the group’s Love Burn brand. If you do, you’ll be required to sign a waiver. Served with a complimentary side of milk.

This 116-year-old Half Moon Bay outpost moved out of a temporary location at Pizza Pie and reopened in the fall, following a devastating fire in April 2021.

Try olive-walnut bread for a briny crunch (especially tasty with a scoop of egg salad), or whole wheat for subtle sweetness.

If it’s really bread you crave and not all the sandwich fixings, take home French bread or a Portuguese loaf.

“How the Other Half Eats”: Sociologist Priya Fielding-Singh on food and inequality in America
Nov 9, 2021 1:32 PM